Petition-Starter Spotlight: Save The Cobblestone

Home » Petition-Starter Spotlight: Save The Cobblestone 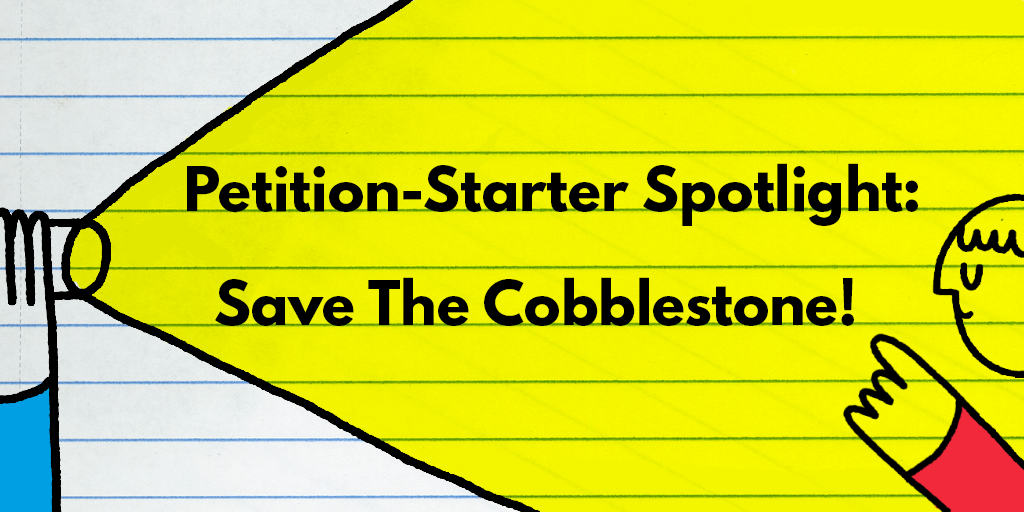 Petition-starter Spotlight: Save The Cobblestone

Pop the kettle on for the second in our series of chats with the people who grow campaigns by starting a petition on MyUplift. If you missed the first one, have a read here.

This time we’re talking to Uplift member Eoghan, who started the petition to Save The Cobblestone Pub last October – after developers applied for planning permission to develop a hotel over this cultural hub. 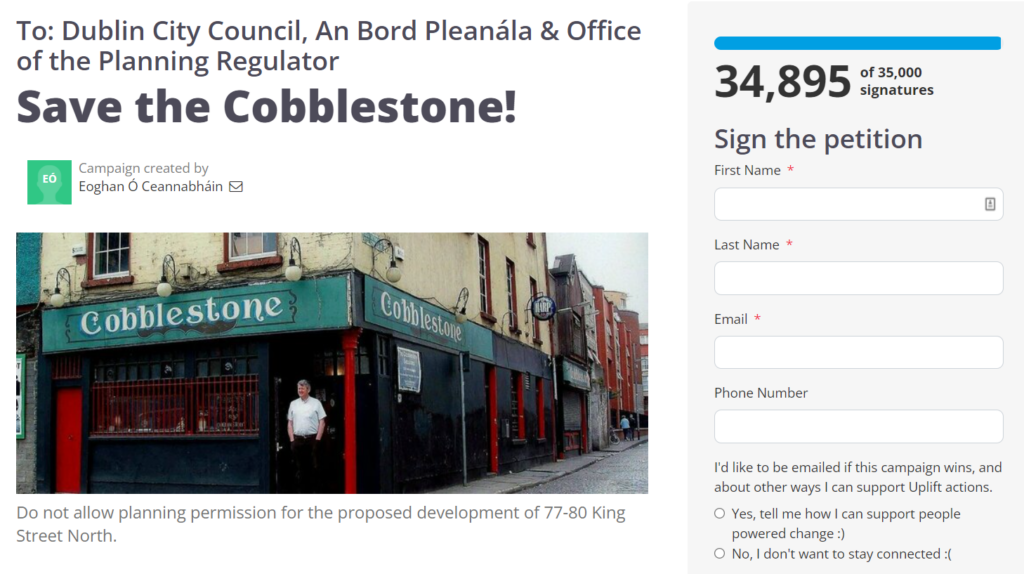 With a cornerstone of local culture and Irish folk music at risk, public support for the campaign rocketed. It tapped into growing public frustration at the wider issue of our public, cultural spaces being handed over to private developers.

Within a few months, almost 35,000 people had signed the petition and hundreds of people submitted planning objections to Dublin City Council. Stunning protest céilís were held in the city that were splashed across the news and online. 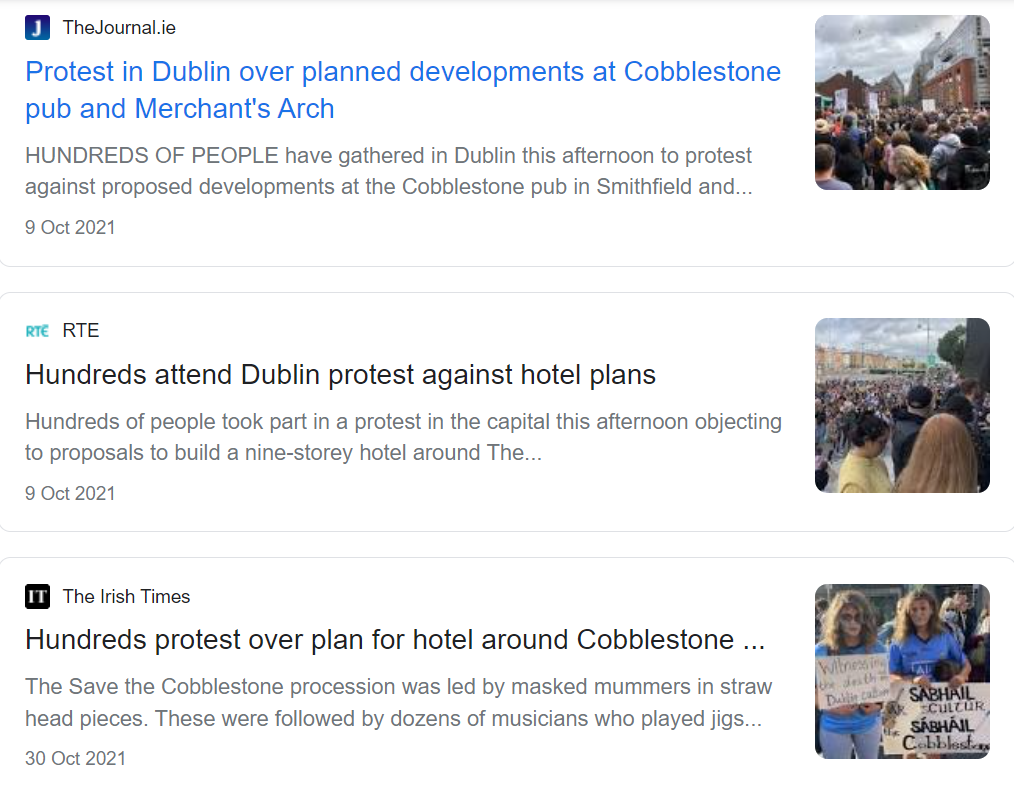 The campaigning creativity and hard work paid off in November, when An Bord Pleanála rejected the developer’s proposal. Just in time for Christmas, the developers launched an appeal to this rejection. But since then, the campaign to Save The Cobblestone has sprung back into action and mobilised people in January to submit objections again and save the beloved pub once and for all.

Without further ado, here’s Eoghan, talking about the campaign’s creative and strategic use of their Uplift petition.

Why did you start the petition?

We wanted to use the petition as a way to kickstart the campaign. There were a few different things we were trying to do with the campaign but I think the very first thing we did was launch the petition.

So the petition was a way of raising awareness about what was going on but really urging people to take further action by both joining the protests and submitting their own observations to Dublin City Council.

How did you go about growing support for the campaign online?

We sent the petition directly to different well-known musicians that we knew in the folk scene, to share, like John Francis Flynn. The issue also just seemed to catch people’s attention. The petition kind of blew up. Once we saw the level of support it had, we thought, look, we should just call a protest straight away and that’s what we did.

Around 2,000 people came to that first protest. From that, we formed an organising committee. It was all kind of ad hoc before that.

Once we started the committee we got social media platforms together [@DublinIsDying] and started putting out information about how to object to the planning application. We organised another protest, just before the deadline [for planning objections].

We also kept promoting the petition – which went in as part one of the submissions. There were several hundred submissions to Dublin City Council overall. I attached the petition to my submission – which had 34,000 signatures at the time when it went in.

It’s really helpful to see what you can do with a petition – that you were able to use the email function, as well, to get in touch with people who signed & wanted updates on the campaign.

Once we had a lot of signatures, that was very, very useful. Obviously not everyone ticks the box (to receive updates) but if I remember correctly, around a quarter of them did. So we were able to email around 8,000 people, keep them updated and give them information about how to submit a planning objection and about the protests.

The campaign drew a lot of media attention – do you have any tips for people on that?

Because it was such a big issue, we got a lot of media interest. Once we got that, there were people on the organising committee who were doing press stuff, like press releases. And we had a couple of people who were spokespeople to the press. We tried to speak to as many of the [media] as we possibly could.

Most of the media were sympathetic but sometimes you get the odd curveball, so we wanted to be ready for that.

Was it the creativity too? Those protest céilís were really engaging.

It definitely helped the issue that we had lots of musicians – it made sense to use them! People were angry but they were also positive and showing the energy of what was there.

What are the next steps for the campaign?

The developers have launched an appeal to our objections with An Bord Pleanála. The deadline for us to submit objections to their appeal was the 25th of January. Anyone can submit an observation to their appeal, even if they didn’t do it the first time.

Fair play to Uplift member Eoghan and the Save The Cobblestone campaign for all of the useful campaigning insights. If you’d like to learn more about the campaign, follow @DublinIsDying on social media.

P.S. Start your own petition on an issue you’re passionate about by heading over to MyUplift. 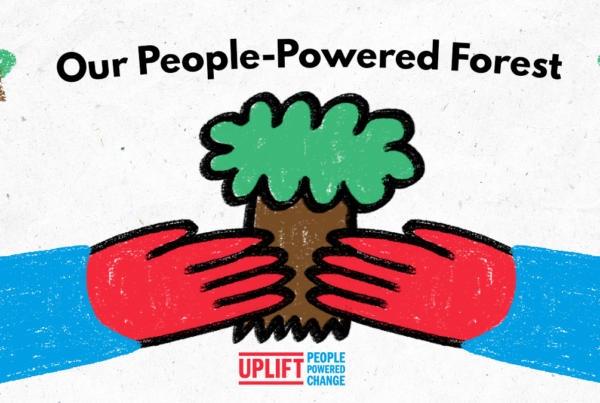 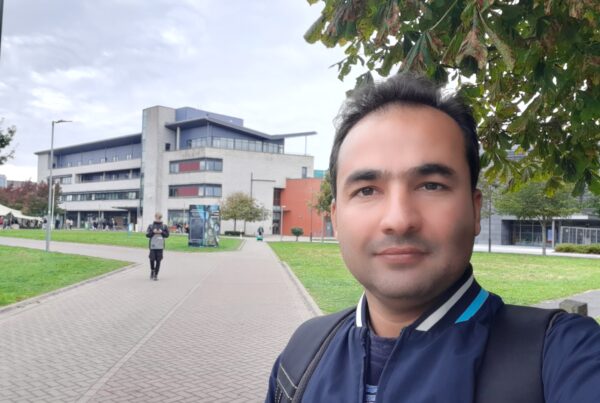 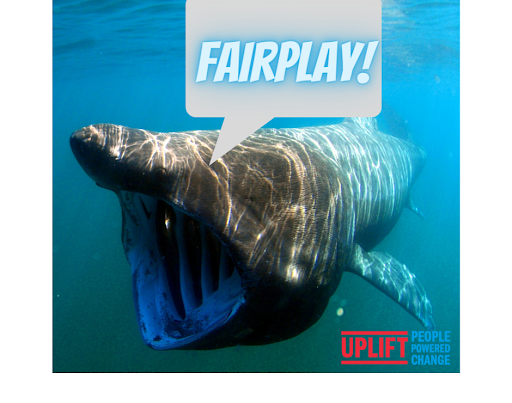